After revealing Elemental Flow and its art and setting, we want to talk about encounters. In Elemental Flow, rather than using violence to defeat someone or something else, you have encounters with other people, where you attempt to reach an understanding of each other’s point of view. 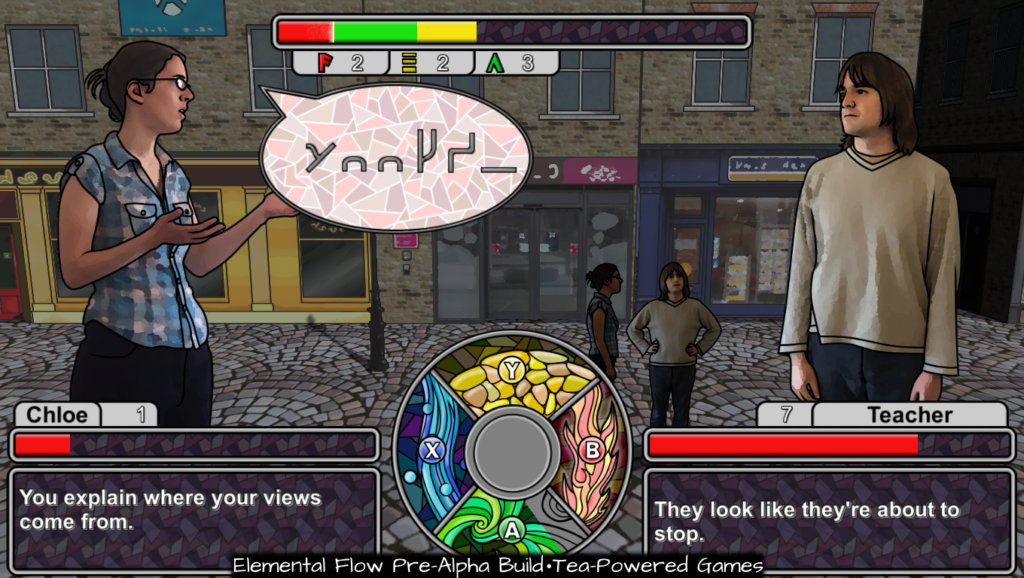 A tutorial encounter from the current build of Elemental Flow. The player is holding B to speak using the fire element.

As an elementalist, the player’s character can imbue their words with elemental properties, giving them special effects. They can also sense the effect of their words and those of the person they’re talking to, such as whether a statement hurt the other person, or if her words are helping others reach an understanding.

Encounters take place in real time. In the screenshot above, the player is holding the B button to speak using a fire ability, and will stop talking when they let go. Different abilities have different effects – even just within your starting abilities, some involve talking, others listening or thinking. They increase the understanding bar, showing that you’re getting to know and trust the other person, but they can also have other effects (like recovering your stamina or charging up a later talking point). Playing involves planning, reacting, finding patterns and being efficient within a time limit, depending on the encounter and the player’s preferred play style.

That’s a lot of information to take in without being able to play – we think the encounters feel quite natural, but we’re looking forward to you all getting a chance to play it! For now, have a look at the gif below to have an idea of what it might look like (it might take a bit of time to load, and when it does, it will be sped up). Let us know what you think, and stay tuned for more updates – there’s a lot more features to come!