Hey everyone! We’re excited to finally be counting down to the Steam release of Dialogue: A Writer’s Story – Sept 20th is less than two weeks away! To celebrate, we’re doing a couple of blogs to talk you through the two main conversation types of Dialogue and the mechanics therein. In case you don’t already know, Dialogue is a game about conversation which sets you in the everyday life of a writer, Lucille. Different types of conversations have different mechanics to better reflect their nature (if you want to read a bit more about Dialogue in general, you can find out more here). Today, we’re kicking off with Exploration Conversations.

In Exploration Conversations, your goal is (shockingly) to explore! You can find doors which lead to additional conversations, treasures which unlock new abilities for other conversations and extra bonuses (like character biographies), all while learning about the characters, their interests and circumstances.

The conversations are laid out spatially, like a map. Each bit of conversation has its own room and there are doors to different rooms with other bits of the conversation. You open doors to move to new rooms by clicking on highlighted phrases in the conversation, like links on a website or in a Twine game. There’s no time limit, and you can backtrack through previously explored rooms whenever you like, so you can wander around the conversation like this to your heart’s content. You can even press the little ‘Play’ button in each room to re-listen to the voice acting (we definitely used this for a few of our favourite lines). 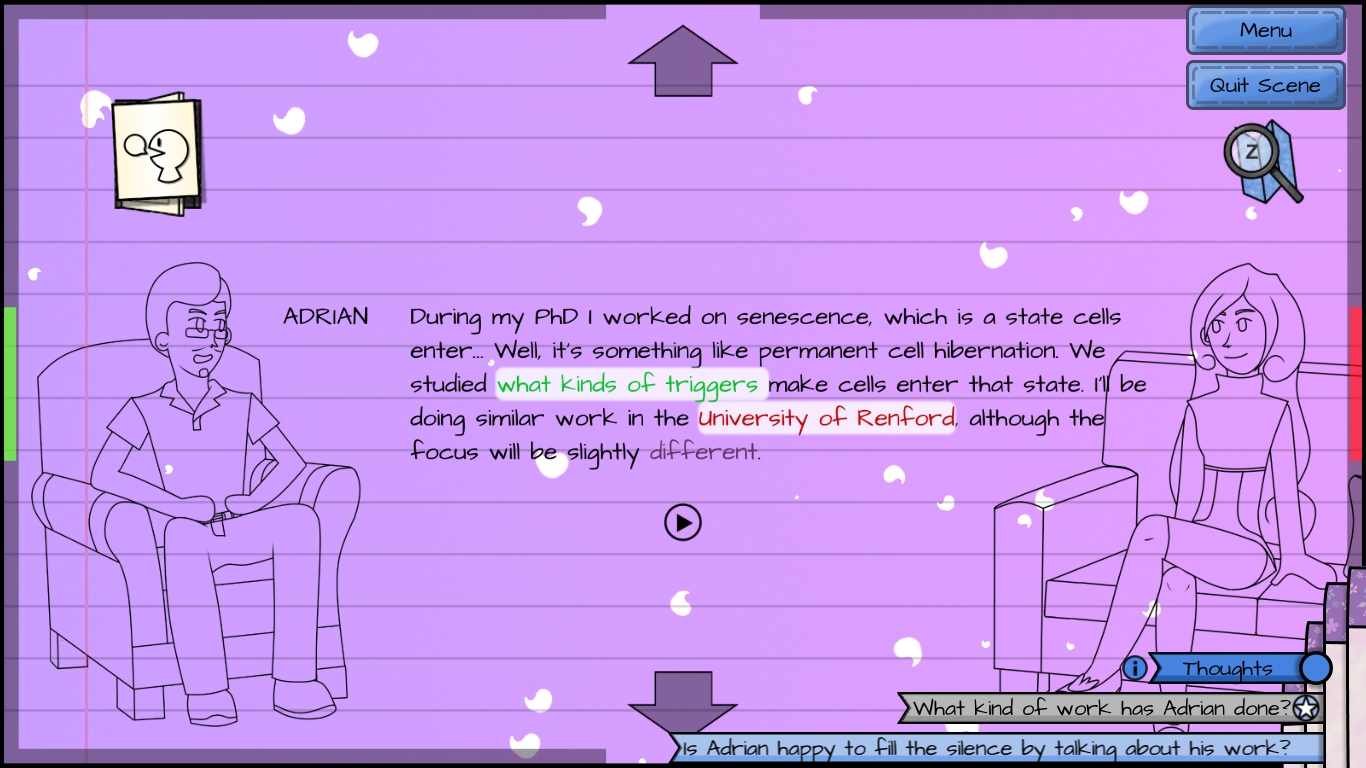 One of the early conversations with Adrian.

Explorations are mostly optional and don’t specifically tell you if you’re ‘finished’. If you run out of leads, want to move on or just need to take a break, you can leave the conversation and come back to it later. Or you could not come back, your choice.

As you explore, you’ll eventually run out of doors to open and paths to go down. If you still find yourself wanting to dig a bit deeper, it’s time to use Thoughts.

Thoughts represent questions Lucille is considering in the back of her head as the conversation continues – questions you help her answer. Sometimes you start with one or two, but you will always come across more of them as you explore. You find the answers by searching for a room in the conversation which directly or indirectly addresses Lucille’s Thought.

When you think you have found a room which answers one of Lucille’s Thoughts, you click on that Thought to use it. If you’re right, that Thought will be marked as answered and something in the room will change (such as a new treasure or door appearing). If you’re wrong, a cooldown timer will start, preventing you from trying to answer Thoughts for a short time. You can’t permanently mess anything up, but this makes it a bit more appealing to think carefully about them, rather than just trying Thoughts everywhere.

Think of a Thought as being a bit like a key. You go from room to room and try to find a locked door or chest to open with a Thought, but instead of seeing an actual locked door, the content of the conversation and wording of the Thought act as your guides.

Thoughts are specific to the conversation you find them in – you’ll never find a Thought in one conversation that you then have to use in a different conversation. However, occasionally you’ll discover something a bit bigger and more widely applicable than a Thought: a Perspective. When you uncover Perspectives, you’re in for an even trickier challenge.

On the surface, Perspectives work very similarly to Thoughts: you collect them in Explorations, and activate them in rooms to unlock new doors. If you miss with a Perspective, a cooldown timer prevents you from trying again for a short while, just like with Thoughts. Perspectives are much rarer than Thoughts, though, and have a few other differences:

The combination of these things makes it harder to pinpoint the best room to try your Perspectives in. The only clue you’ll have is that each Perspective will be inactive if it cannot be used at all in your current conversation, and that still doesn’t narrow things down much. 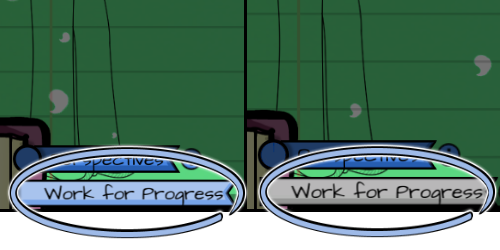 Perspectives appear grey when they can’t be used in a scene.

If Thoughts are like keys, Perspectives are a bit like multi-use conversation tools which help unlock new secret paths for Lucille in all her conversations. You might want to apply a Perspective when you find evidence that someone really agrees with that Perspective, or, conversely, when you enter a room where someone shows signs they specifically disagree with it. Either way, it will often take persistence, some backtracking to conversations you thought were finished, and a solid understanding of the characters to find all the hidden pathways opened by your various Perspectives.

Exploration Conversations let you take your time moving around dialogue in a way you’re probably not accustomed to seeing in other games. Follow one path of the conversation, find a new Thought to unlock a new path somewhere else. Explore deeply enough and find new abilities and Perspectives, which open all new possibilities even in completely different conversations. Moonlight in learning about the characters, or doggedly pursue every nook and cranny. Will exploring these conversations feel more like a walk in the park, or a labyrinth? We’re looking forward to hearing what you all think when you finally try it out September 20th!