Where Exploratory conversations were all about going at your own pace, backtracking, studying and (fittingly) exploring, Active conversations are all about the here and now. These conversations play out in real-time, with one or more people chatting with Lucille, while you listen on and make choices which reflect how Lucille responds at many different points in the discussion. 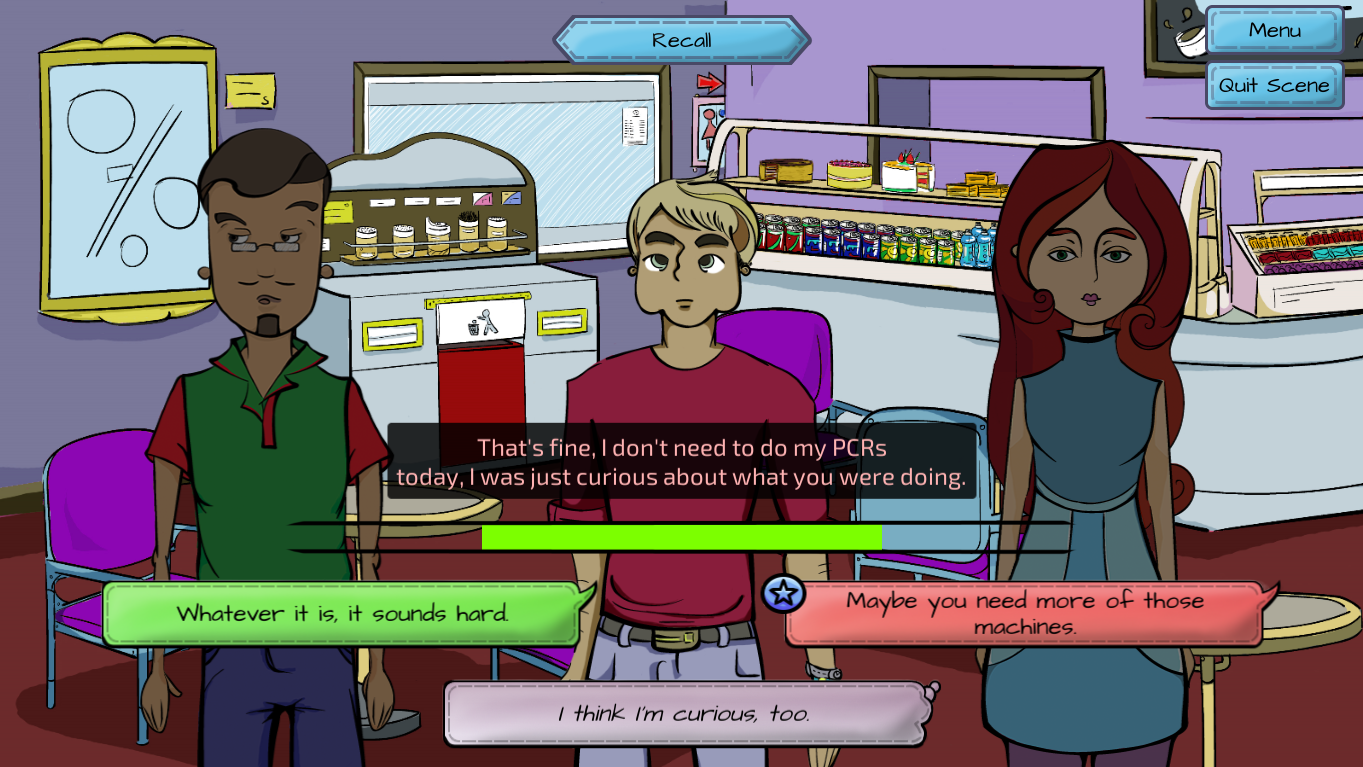 Even the choices have a time element to them: you have a certain amount of time to choose a response, after which the conversation just moves on. Saying nothing is also a choice though, and this time pressure is less about providing difficulty, and more about staying in the moment and keeping things moving. Each individual choice has a very small effect, but they add up.

On the surface, that’s it. Other characters speak, you choose words (or choose not to speak at all), and these choices shift how the conversation goes, until it ends and you move on to other scenes.

What you choose does more than just change what is said in the moment, though. It leaves an impression on the other characters – an impression that ultimately determines a few extras, like whether Lucille learns something from the conversation, or whether new conversations with that character or others are unlocked.

Each choice has a different colour, and these represent different tones or intents. We’ll let you experiment and draw your own conclusions about what they mean, rather than say so here. Also, if you happen to be worried about colour blindness, there’s an option to turn symbols on which also indicate the tone. 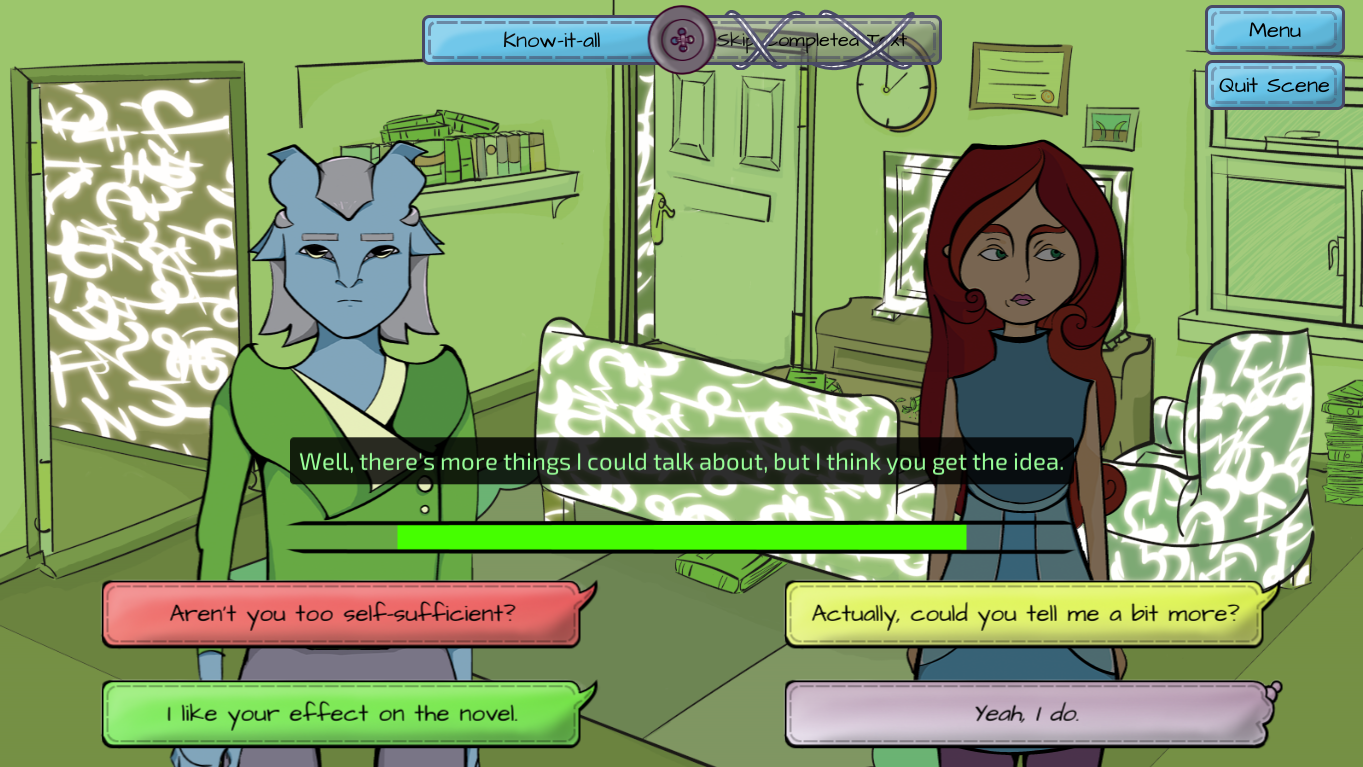 No colour is inherently bad or good, they just represent different approaches, and you can stick with one or switch it up on a case by case basis. Your choice of tone leaves a lasting impression though, and as you lean towards one tone, it will appear a bit more frequently – it’s not easy to just flip-flop at a moment’s notice.

In addition to tone, some choices will leave a positive or negative impression, making the other characters happy or rubbing them the wrong way. Sometimes this is apparent, but sometimes it’s not always easy to tell (a bit like real conversations).

When you combine choosing the tone that you prefer, and considering the character or situation at hand, these choices gain a bit more depth than just ‘saying what you want’. What does a ‘good’ red choice sound like with this character? What if I want to be more supportive, but am concerned about offending them?

Ultimately you’ll have to experiment and get to know the characters to figure out what works and what doesn’t. You can replay individual conversations after a certain point in the game, but you also have other tools to help experiment and work out your own style of conversing: Focuses.

Focuses can give you new options during conversation, support a unique style of play, or even add entirely new mechanics to Active conversations. You collect focuses throughout the game in a variety of places (Exploration conversations, for example). Then, when you are between scenes, you choose one focus to equip and take with you into conversation.

If you need more time to think about choices, you might bring the Consider focus. If you want to speed things up, you can skip lines with Know-It-All. You can get more feedback about the impression you’re making with Careful Observation. If you’re particularly chatty, try getting a chain bonus with Determination. And these are just the tip of the iceberg.

While in conversation, you can see your chosen focus at the top of the screen. Depending on the focus, it may have a button to activate, a bar to indicate cooldown time, or a variety of other interface elements.

Since you can only choose one and there are many useful effects, you’ll have to make some tough choices about your priorities. Often you may find you’ll use one focus as you get the hang of the game and characters, and switch to another on your second or third attempt of a scene.

The ‘people chat, you make choice as they pop up’ format of Active Conversations might look familiar, but there’s some hidden nuance there which is pretty unique. Ultimately, how you approach these conversations is up to you – even if you just pick whatever choices seem fine to you at the time, you can still play through the whole game and enjoy the story.

However, if you want to dig a bit deeper, experiment, and really engage with the characters in Lucille’s life, we think you’ll get as much out of it as you put in. On top of all that, there may be a couple extra surprises to make it worth your while.

If this sounds interesting to you, go play Dialogue when it comes out on Steam Sept. 20th (you can even wishlist it now *nudge nudge*).