Hello everyone! Now that we’ve shown the new demo of Elemental Flow at a few events, we’re feeling pretty good about where it stands. We’re still brewing up the world, but there’s a specific part of it we’d like to talk about today: the Elemental Plane.

The game takes place in two separate but connected areas. In Reality, things look quite normal; there are people you can talk to, buildings and streets, tables and chairs and everything else you would expect. However, you’ll also have the opportunity to explore a parallel place called the Elemental Plane, where things are a bit more… odd.

Reality on the left, Elemental Plane on the right.

The Elemental Plane isn’t somewhere you pop to on a whim – most people don’t even know it exists. However, your character will sometimes explore the Elemental Plane to see things from a different perspective. A disagreement between people in Reality can become a battleground of ideas in the Elemental Plane, while a person working through a tough phase in their life might be represented by multiple spirits, each representing an aspect of themselves and their troubles. And speaking of spirits…

An assortment of spirits just hanging around… for now.

The Elemental Plane is inhabited by spirits, the essence of people and ideas given form. While spirits can speak, move around and act, they embody a single idea or facet of a person, so they’re quite single-minded.

Within the Elemental Plane, you’ll be able to use your powers to talk to these spirits, which are simpler and more predictable than real people. It’s a good place to practise, break down an issue or come up with new techniques. Don’t take the spirits lightly, though, or you’ll run into trouble! Throughout the game you’ll explore the relationship between your actions in the Elemental Plane and their effect on Reality, whatever that may be. 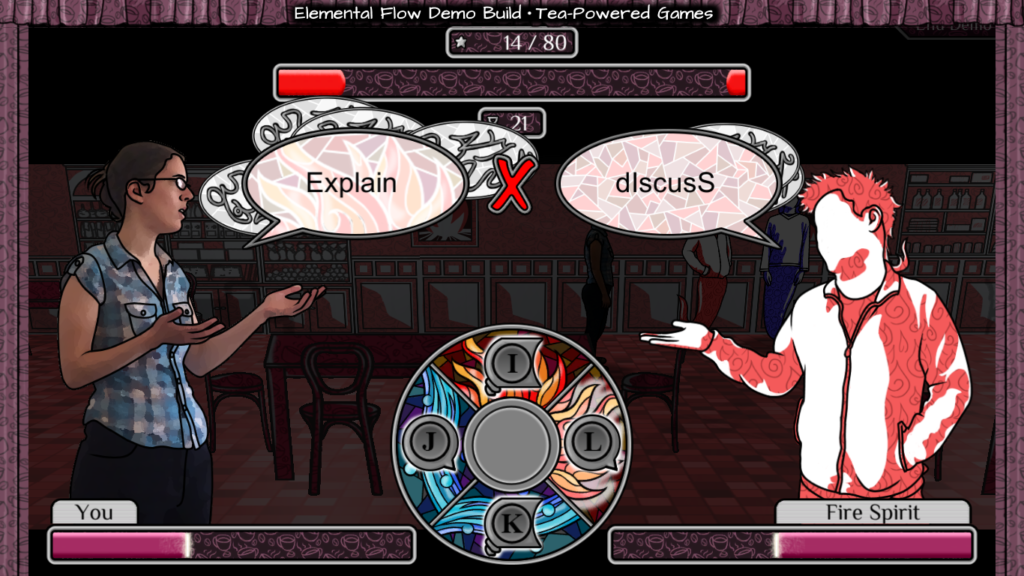 Not every conversation goes smoothly! (Also, dIscusS is not a typo)

We’re working on polishing the demo version of Elemental Flow, and we’ll be making that available online as soon as it’s done. Look forward to exploring the Elemental Plane and talking to spirits from the comfort of your home in the near future!

Wow. I’d like to see this in action. Every game I’ve worked on has played with the idea of multiple planes you could traverse so the concept is hardly new to me but it looks like you’re taking the concept into some very interesting directions. Respect.