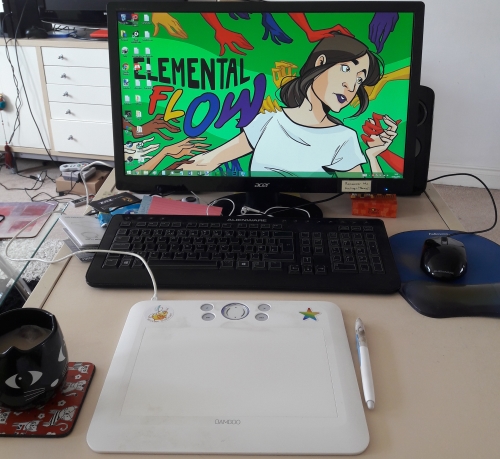 Most of the time, I’m in front of my computer, writing, editing or drawing something that will go in our games. Other times, I’m doing the business side of things – sending emails, filling out applications or making pretty spreadsheets… Also in front of my computer (we go for walks and work out, though!) Said computer hasn’t changed much since we started Tea-Powered Games five years ago, which probably means it’s a bit old in computer terms. I’ve got a few sticky keys too, maybe I should also consider replacing my keyboard… 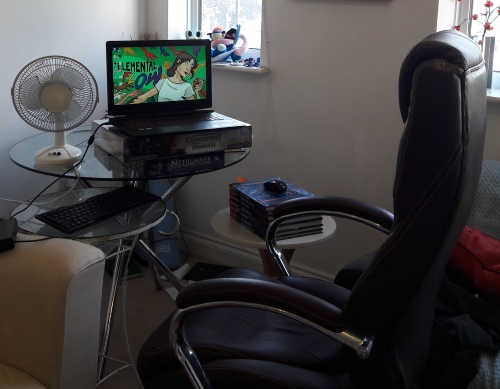 While Dust was out of the room, I snuck another photo, so you could see how the other half of the company works. Dust’s got a laptop (better than my PC), a mouse and a keyboard, each on its own table, propped up with game boxes and DnD books. We’re in the same room, so we use headphones if we really need to focus, but otherwise we interact a lot, bouncing ideas off each other and discussing character abilities, story beats or whatever the dish of the day is. 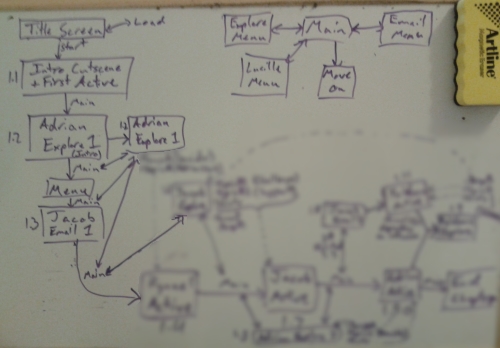 Whiteboards really help with this, which is why we have three of them full of diagrams, sketches and lists (maybe one day we’ll get one of those whiteboard wall coverings). Drawing that little UI effect you’re imagining is usually quicker than trying to explain it or find an example. We tend to take photos before we erase our brainstorms, since we don’t want to lose any old ideas. Here’s an old one from the first Act of Dialogue (don’t look too closely if you haven’t played it yet!)

You’d think as a writer I would use a lot of notebooks, but Dust is the one who has ten of them, I’ve mostly got the two. I tend to write straight into Notepad or Word, so I can search and copy+paste. My computer folders are more organised than my notebooks, anyway. On the other hand, I can’t draw straight into Photoshop, so I have a couple of sketchbooks of different sizes. Actually, I used Paint.Net for most of our Dialogue work, and only switched to Photoshop for Elemental Flow. It’s a good free alternative, but I missed some Photoshop features… 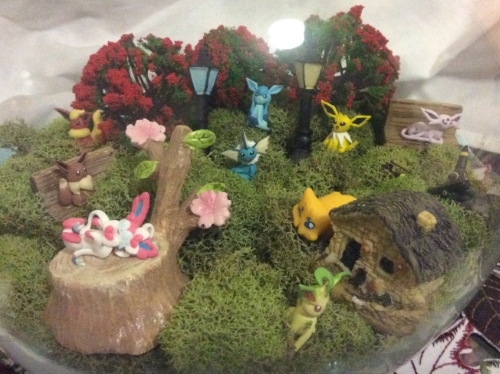 And one last tour-of-the-office photo – a bonus for the pokémon fans. This is our terrarium with eeveelutions… and one sneaky joltik! The rest of the house is pretty normal, plushies excepted (did you spot the froakie and greninja earlier?), so this tends to catch people’s eye. Apparently you can just drop some moss on glass pebbles and fishtank rocks and it’s fine for years? I think it’s dried moss, maybe, I don’t know. As much as I love biology I don’t have much of a green thumb.

So that concludes my very informal tour with Tea-Powered tidbits. If there’s anything you’re curious about (what kind of tea do we drink? How good/bad is our handwriting? Why is joltik winking?) leave a comment below!

END_OF_DOCUMENT_TOKEN_TO_BE_REPLACED

What do you mean by ‘Narrative Design’?

Fellow narrative designer (and all around great guy) Rob Morgan sometimes introduces himself in talks as ‘a narrative designer, whatever that is’, and it’s always stuck with me. I cannot help but appreciate the sentiment, having witnessed the term ‘narrative designer’ used to describe a variety of roles and jobs in talks, job descriptions, and in normal conversation with colleagues. I don’t believe any of those different uses of the term were wrong or less significant than any other, but I do think they can be distinct, sometimes covered by different people on a team or requiring different skills.

In the interest of thinking about this a bit deeper and preventing the title from meaning so many things that it functionally means very little, here are the three main kinds of narrative design I have come across. This list is almost certainly not exhaustive, but I hope it acts as a good starting point for discussion, and inspires you to examine your own thoughts on the subject.